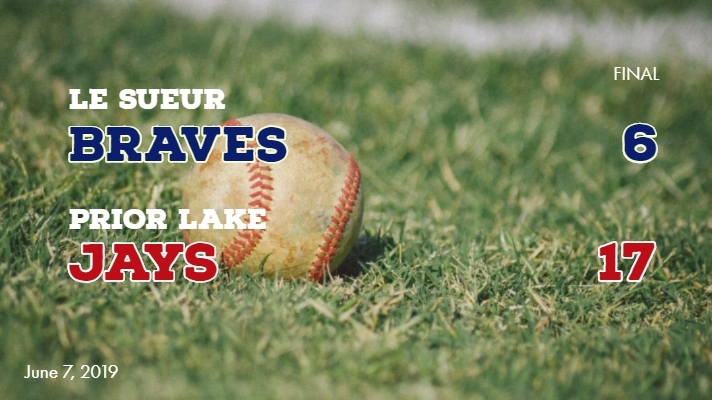 The Jays racked up 13 hits and scored 17 runs, 12 of which were plated in the third inning with a 17-6 win over the Le Sueur Braves on Friday night and bringing their overall record to 4-0.

Ben Kelsey singled in the second inning and scored off of an Adam Cress triple.  Cress would go on to score on a ground out from Matt Cady starting the Jays off with a 2-0 lead.

The Jays would score 12 runs in the third inning with every Jay in the starting lineup reaching base and then scoring.  Zac Repinski, Tommy Keating, Kelsey, Jeff Butler, and Mitchell Goodwin would all send runners across the plate with RBIs in the inning.  Another run would cross in the fourth and two more in the sixth inning.  Keating was 4 for 5 with four RBIs, a double and a triple.  Repinski was 2 for 3 with two doubles and three RBIs, and Kelsey was 3 for 5 with four RBIs.

Cady would lead the Jays to a win pitching six innings allowing seven hits and three runs while striking out eight.  Zach Matthews would come in on relief allowing three runs and walking three without a single hit.  Goodwin would finish the seventh for the Jays walking one and striking out two.

The Jays take it on the road this Sunday, June 9 for a 6:00 pm game against the Chanhassen Red Birds at Chanhassen’s Storm/Red Bird Stadium at Chanhassen High School.