The Prior Lake High School varsity baseball team came out swinging in its first two games of the 2019 season, winning both handily, 11-1 against Shakopee on April 8 and 10-0 at Rosemount on April 9 as the Lakers try to defend last season’s South Suburban Conference championship.

The wins are the first under new Laker head coach Al Iversen, who took over after previous coach Greg Nesbitt stepped away from the program last summer.

In the Shakopee game, the Lakers got on the board right away in the first inning thanks in large part due to control issues from Saber starter and Augustana commit Caleb Kranz. Laker shortstop and Minnesota-Duluth commit Alex Wattermann led off with a five-pitch walk, third baseman Henry Emmerich was hit by a pitch and first baseman Jonah Hoeg loaded the bases with a five-pitch walk. Wattermann scored the first run of the game on the ensuing pitch to give the Lakers a 1-0 lead. Right fielder and Minnesota-Duluth commit Sam Tanner grounded out a few pitches later to drive in Henry Emmerich, who had moved to third on the earlier wild pitch, giving PL a 2-0 lead. Hoeg scored on a wild pitch during the next at-bat to give the Lakers a 3-0 lead before even getting a hit. The first hit of the season was a big one and came a couple batters later when designated hitter Jett Heinen homered to left field. Prior Lake led 4-0 after the first inning.

Shakopee got a run back in the bottom of the inning thanks to a throwing error followed by a double, cutting the Laker lead to 4-1.

Both teams were held in check until the bottom of the fourth inning when Kranz was removed due to a high pitch count. Wattermann led off with a walk and Henry Emmerich doubled to move Wattermann to third. Hoeg got hit by a pitch to load the bases during the next at-bat. Wattermann then scored on a wild pitch on the first pitch to Sam Tanner and Henry Emmerich scored later in the at-bat on a sacrifice fly to the right fielder, extending the lead to 6-1. Left fielder Sam Emmerich, Henry’s twin brother, singled later in the inning to drive in Hoeg and it was 7-1 after four innings.

The fatal blow was delivered in the fifth inning. After center fielder Austin Gordon walked and Wattermann was hit by a pitch, both players perfectly executed a double-steal, with lead runner Gordon taking the throw from the catcher off of his jaw (he’s fine). Henry Emmerich then hit a sacrifice fly to the right fielder to drive in Gordon and Hoeg singled to left to score Wattermann, pushing it to 9-1 Lakers. Sam Tanner then ended the game during the next at-bat, homering to left-center field to get the score to 11-1, causing the mercy rule to be enforced.

Not to be lost in the offense was a great outing by Laker starting pitcher and Oregon State commit AJ Lattery, who finished with a final line of 5 innings, 3 hits, 0 earned runs and 4 strikeouts.

Lattery, Heinen, Gordon and catcher Sam Shopbell were the inaugural winners of the postgame t-shirt awards (pictured below). Lattery won game MVP for his performance on the mound, Gordon won Mr. Hustle for his stolen base, Heinen won game-winning hit for his home run and Shopbell won golden arm for throwing out two Shakopee runners trying to steal. 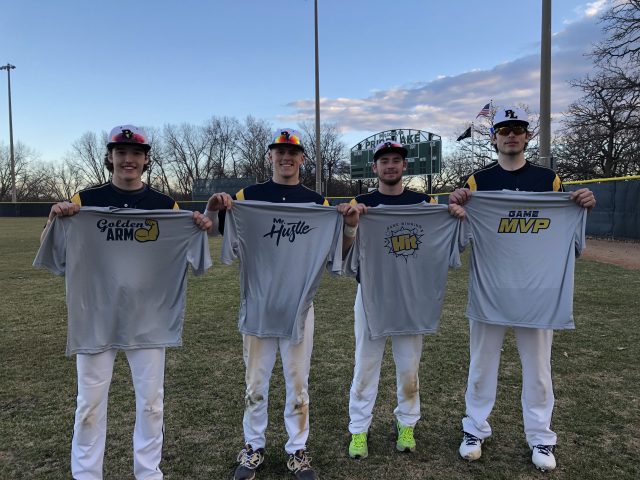 The game at Rosemount started with a bang, as Hoeg blasted a home run halfway up the hill on the opposite side of the fence at Rosemount High School to give the Lakers an early 1-0 lead.

That was all the offense that Laker starting pitcher, Minnesota-Duluth commit and Sam’s twin brother, Russ Tanner needed as the tall lefty was dominant on the mound, striking out 11 Irish batters and only giving up one hit and taking a no-hitter into what was the fifth and final inning.

The Laker offense worked much like the Shakopee game, with the hitters working counts and getting on base. Prior Lake scored at least a run in every inning.

After Hoeg’s early homer, the Lakers tacked on a pair of runs in the second inning with the only hit being a Heinen single to lead off the frame as the runners moved around the bases on walks and wild pitches or passed balls.

Prior Lake added another run in the third inning. After Hoeg singled to start the inning, Heinen doubled down the left field line to score the run and push the lead to 4-0.

The backbreaker for the Irish came in the fourth inning when Gordon singled, Wattermann walked and Hoeg was hit by a pitch to load the bases. Gordon eventually scored on a passed ball and then Sam Tanner blasted a double to deep right field to score Wattermann and Hoeg and break the game open, extending the Laker lead to 7-0.

The Lakers lined up the mercy rule win in the fifth inning, second baseman Tyler Kelley walked and Shopbell singled to start the inning but Shopbell’s courtesy runner, Blake Haferman got picked off. However, Austin Gordon hit a hustle double down the left field line to score Kelley. Wattermann then singled to score Gordon and Henry Emmerich doubled off the right field wall to score Wattermann and get us to the final score of 10-0.

After the game, Gordon kept the Mr. Hustle t-shirt for his hustle double, Hoeg took home the Game Winning Hit and Russ Tanner was awarded both Golden Arm and Game MVP.

Due to weather, the games originally scheduled for Thursday April 11 have been moved to Monday April 29 as parts of doubleheaders.

Assuming the weather subsides, the Lakers will be back on the field on Tuesday April 16 at Memorial Park against Eagan. First pitch is scheduled for 4:30pm. Following Tuesday’s game, Prior Lake will be on the road on Wednesday April 17 at Alimagnet Park against Burnsville at 4:30pm, at home against Farmington on Thursday April 18 at 4:30pm and on the road at Eden Prairie on Saturday April 20 at 1pm.