The Prior Lake Jays took “Series 1” of the 2017 playoffs 2 games to none versus the Victoria Vics who played hard but had limited options with thin bench. Timely hitting, early leads, strong pitching and defense were the traditional formula to those wins and what had, despite a similar regular season record, made the ’17 Jays a more competitive squad than in 2016. Like the Vics, heading into “Series 2” of the 2017 Section 3B Playoffs, the PL Jays had an 0-2 regular season record against the #1 seeded Chanhasssen Redbirds dropping 6-0 and 6-1 games in the regular season. The winner would advance to the Section 3B Championship Saturday and earn a slot into the 2017 MBA Class “B” Tournament field.

Chanhassen as #1 seed hosted Game 1 of Series 2 and had defeated the PL Jays 6-0 & 6-1 in regular season seeding action. The Winner of this series advances to the Section 3B Championship which will feature 2 seed games in doubleheader format. The loser will play though other 2 series losers in single elimination games later this week.

The Jays struck 1st with leadoff hitter OF Cody Kashmark scoring on a CF Jonesy Buescher hit following a game starting double in the 1st. The Jays bats chilled but threatened in the 6th on an error, hit, walk sequence with 2 outs by Kashmark, Butler and Loftus but runners stranded on a Buescher strikeout. The Jays would not score until the 6th when 2nd baseman Mike Edlefsen led the frame with a walk and Scott Geisler plated him with a 1 out grounder to short.

The RedBirds dropped the game margin in the 3rd Inning on consecutive hits to D.Smith, BArnold and Turner. Groundout by Fischer plated a run and the 3rd run scored on 2 out passed ball with Turner sllding home with Zenner lagging to cover the plate on the ball that trickled 15 feet away up 1B line foul making the score 3-1 Redbirds after 5. The Redbirds tacked on 3 in the 6th then a 2 run HR by Hoffman ending Zenners day with a 8-2 Chanhassen lead. Jason Peter was tagged for 3 runs in the 8th to complete the scoring for Chanhassen.

5 Jays had a hits with 7 Jays stranded on base.12 Jays saw action.

At Prior Lake Veterans Field of Memorial Park 8/6/17

The Jays returned to Veterans Field of Memorial Park needing a win to extend the Series on Sunday August 6. Brock Collins would toe the hill for the Jays and Chanhassen HS player Thomas Thompson for the visiting RedBirds.

Collins faced 4 and walked 1 in the scoreless Chanhassen 1st while the Jays put a charge in the home crowd with a Cody Kashmark walk and stolen base followed by 2nd baseman Jeff Butler ripping a ball to shortstop that was bobbled for an error allowing the Jays 2nd runner with no outs. Following a flyout to short by Jays shortstop Mike Edlefsen, centerfielder Jonsey Buescher plated the 1st run knocking in Kashmark on a single. With 2 aboard the hot swinging catcher Tommy Keating ripped a ball to short that resulted in the 2nd error of the inning and a 2-0 Jays score.

In the 2nd inning Chanhassen would answer plating 2 runs on 2 hits, sacrifice fly, a walk and a hit batter while the Jays were blanked until following the scoreless RedBird 3rd. Jeff Butlers leadoff double scored on an Edlefsen single, Following Bueschers sac bunt to move Edlefsen a Tommy Keating RBI double plated the Jays 4th run. In the 4th, Collins showed glove facing 1 out and 2 on base, rightfield Derek Smith tried to use his speed and lay down a bunt. The hard throwing Collins squared after delivery and the bunted ball carried flat several feet in front of the mound where Collins launched forward snaring the 2nd out of the inning on the dive and firing to 2nd where Gunnar McCarthy mis-read the ball and broke hard hoping to reach 3rd but the “puma like” leap and double play squashed the threat and RedBird inning. After a scoreless 4th by the Jays, Thompson was lifted for John Eischens. For the Jays, some fine defense behind Collins helped keep Chanhassen scoreless until the 8th facing 3,4,4,3,3 batters in the 3-7th innings. In the 8th, a single to Zach Hoffmann followed by a fielders choice, error and wild pitch scored pinch runner Justin Arnold narrowing the game to a 4-3 margin. Collins drew a flyout to Adam Cress and struck out pinch hitter Campo to end the Chanhassen threat.

Following a scoreless 8th by the host Jays, Collins would roll out on a low pitch count and bottom of the Chanhassen order coming up. Collins hit the 1st batter McCarthy on a 3-1 count then he was sacrifice bunted to 2nd. Smith grounded to 2nd and the sure handed Jeff Butler with the tying run advancing to 3rd base. Leadoff hitter Brandon Arnold had made some fine plays in the field at 3rd base and then shortstop but was 0-3 with a sac rbi for the Redbirds. The speedy Arnold represented the winning run with the tie at 3rd. Incredibly, an Arnold bunt attempt bounced to chest height and with him breaking from the box, the ball hit him resulted in an out and ending a great Brock Collins pitching effort with a complete game 9 inning win and forcing a decisive game 3.

SPECIAL THANKS: Keating Family for supporting Vet Cafe and admissions operations as well Evergreen Church of Lakeville. While out spreading the good word, their team stopped at Veterans Field before Game 2 of Series 2 donating ice cream sandwiches for fans. 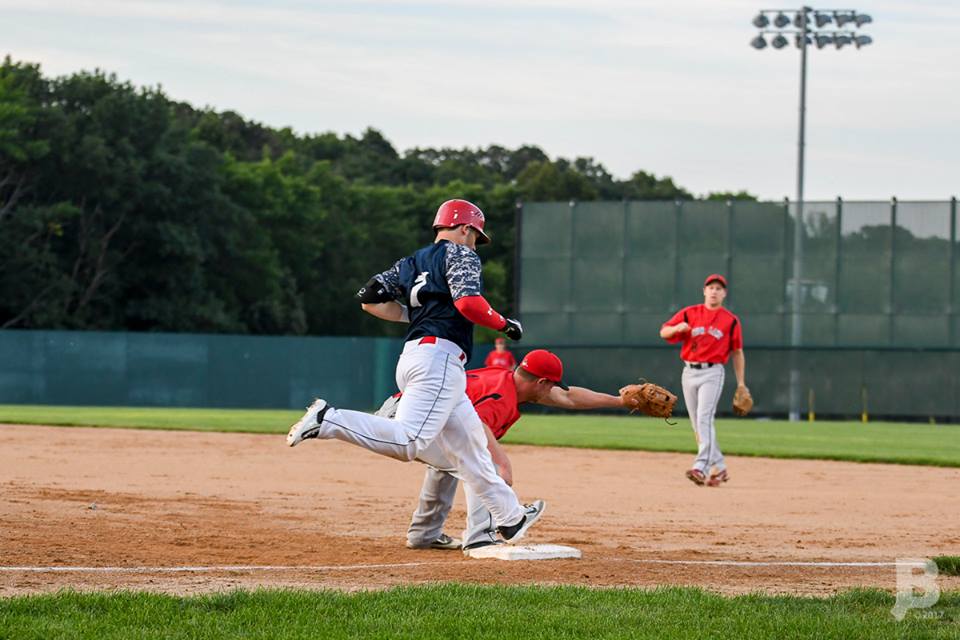 With a trip to MBA Class B & the Section 3B Championship Saturday on the line. The Jays travelled North to Chanhassen under a moon lit sky for the decisive game 3 showdown.

The Jays appeared in form with early offense with a 1 out single by Jeff Butler followed by a 0-2 bingle just past the infield by DH Joe Loftus but both were stranded in what would be a long day for the Jays offense. The Redbirds plated what would become the margin with an Adrian Turner single, stolen base followed by a 2 out double deep to Right over the head of Adam Cress off of Jays pitcher Mike Edlefsen. After a scoreless Jays 2nd and 3rd, Turner struck again with a double down in rightfield corner followed by an error, fielders choice and single to left by DH Shawn Riesgraf before Edlesen struck out Matt Smith to end the inning with a 0-2 score after 3 complete.

The Jays offense would threaten but sputter on the day with Kashmark (who had led off games 1 & 2 reaching base and scoring), Butler and Loftus tallying 5 Jays hits but a bottom order striking out 14 times to Spitzak, Choles and Nablo. 10 Jays were stranded on the day. There was a scary moment for fans in the 8th as a ball ripped up the middle bouncing on the thick Chanhassen grass was being approached by Corey Goodwin had hopped from the dirt firing striaght up to his face glancing off of his eye. Goodwin stayed down several minutes, immediately healing a small cut upon learning he was in Chanhassen and remaining to complete the game. The Jays sent 5 in the 8th with Chanhassen plating 2 and had 1 on in the 9th on a walk to Edlefsen who was lifted for Matt Cady on the mound to start the 8th inning but outfield Adam Cress struck out to end the threat and game with Chanhassen prevailing in the series.

The RedBirds, as #1 Seed and advancing, will HOST the 2017 Section 3B Championship scheduled for Saturday 200PM (Shakopee VS PL/Burnsville/Chaska) and game 2 to follow near 500PM with Chanhassen VS Eagan. Game 1 will determine 3 & 4 seeds while Game 2 is for #1 and 2 representing Section 3B at the 2017 MBA Class B State Tournament Championship at Hamburg, Green Isle and Norwood.

The Section 3B seeding games of the regular season were not kind to the 2017 PL Jays winning once in 12 tries but competing throughout the season grabbing early leads to see opponent charge back to win games.

The 2 game set with Burnsville Bobcats was no exception with Burnsville claiming a win June 6 with the Jays and Bobcats 0-0 after 5 before the Burnsville run scored in the 6th on Ben Koopman who relieved Lawson Zenner for the Jays. The Jays answered with 3 in the 6th on a single, K, walk by Goodwin, Edlefsen and Butler before a Tyler Edwards double. A Loftus single cpleted the scoring for a 3-1 Jays lead after 6. The Bobcats plated a run in the 7th on pitcher Mike Edlefsen then 3 in the 9th on Brock Collins with a walk, single, fielder choice by Hensen, Opitz & leadoff hitter Prozinski followed by an out(2) single and Jays error before the team got off the field yielding 3 9th inning runs. The Jays sent 5 to the plate but stranded 2 (Frederick & Broderick-walk/hit), and the tie on a Corey Goodwin groundout to 3rd to end the game with a 5-3 loss as winning run at the bat.

In their 2nd matchup June 14 at Burnsville Alimagnet #2, The host Bobcats plated the 1st run in the 1st inning on an error, stolen base, error followed by a passed ball. The Jays evened the game in the 3rd on a Tyler Edwards triple and Jason Peter sac fly. The Jays scored twice in the 6th on a walk to Kashmark error in center on a Jeff Butler rip then 2 RBI single by Edwards for a 3-1 score after 6. The Jays plated another for starting pitcher Mike Edlefsen in the 7th on a Jimmy Cosgrove bingle over the infield and score on an Adam Cress single for a 4-1 score after 7 innings played. Following a 1-2-3 top of 8 by the Jays the host Bobcats scored 6 runs chasing Edlefsen after 8 1/3 and Ben Koopman walking 2 batters before the Jays were able to record outs and escape. In the 9th the Jays fought scoring 3 on an RBI single by Cress plating Jacob Hitz and 2 RBI single to leftcenter by Cody Kashmark who plated 2RBI scoring Edlefsen and Cress. Kashmark, the tying run, was stranded as Jeff Butler was punched out looking at a 1-2 count giving Burnsville the 8-7 win with the winning run at the plate for the visiting Jays.

The winner of the “Series 5” 1 game playoff between Burnsville & Prior Lake Jays on Thursday Ausgust 10 will advance to Chaska Athletic Park on Friday August 11 needing another win to advance to join the Final 3: Chanhassen Redbirds, Eagan Bandits and Shakopee Indians who won Series 2 qualifiers.

The Cubs, as higher seed from regular season HOST Friday having been swept by the Shakopee Indians in 2 games of their “Series 2”. 2 “seeding games” are scheduled for Saturday August 12 at Chanhassen (as #1 seed from Regular season and winning Series 2) VS Eagan to follow 3&4 seeds playing at 2:00PM for #3 representative and Championship taking place following, around 5PM following re-preparation of diamond from . Chanhassen will square with Eagan for #1 seed at the 2017 MBA Class “B” Tournament Championships in Hamburg, Green Isle and Norwood. ALL 4 SATURDAY QUALIFERS ARE ALREADY IN THE MBA B TOURNEY. Brackets will be set by MBA on matchups for 1st round games.

Confused….call the Integra PL Hardball Hotline 952-226-3800 before supporting any Section 3B game and get the latest schedule information. SUPPORT MBA TOWNBALL! 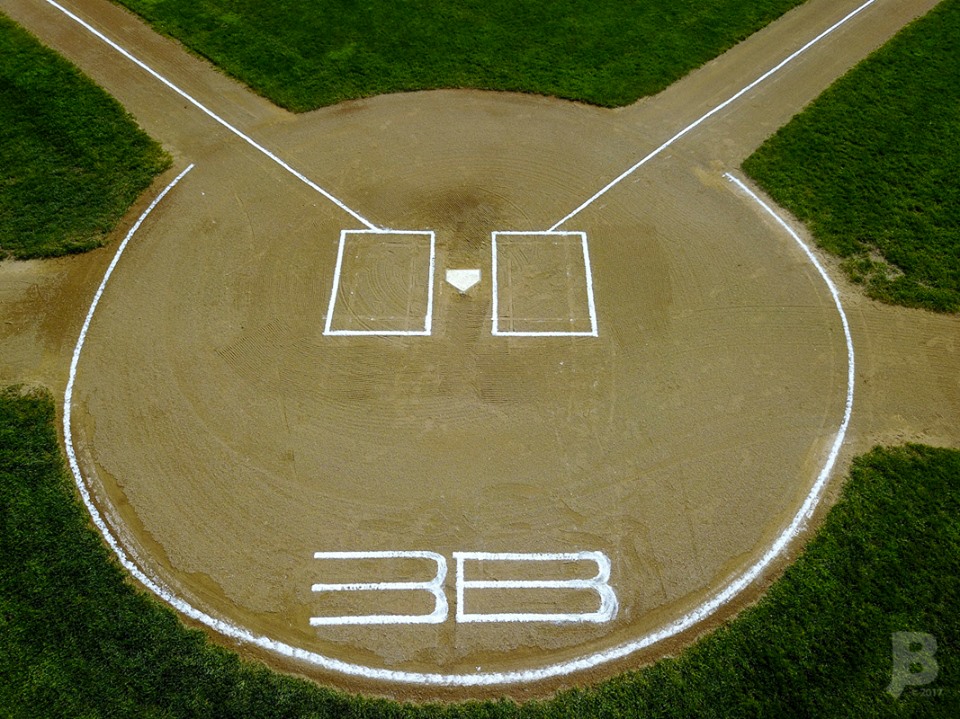 Veterans Field of Memorial Park in Prior Lake. Sight of Game 2 wins in Series 1 & Series 2 Playoffs 2017. Photo By: JUSTIN BRAUN.