On a perfect late Summer weather day at Creeksbend Golfcourse 48 golfers on 12 teams battled and the team of Nate Sickmann, Paul Schons, Kristin Henry and Lucas Henry held off a late charge from Fall 2020 Champs scoring -13 while TJ Larson, Dan Schroeder, Reed and Biezuns as well Ben Kelsey, Joe Loftus, Steve Maher and Adam Persic who were tied at -11. The tie brake favored “Team Larss” who relented the crown. The Champs will have their win enshrined on the Hoppe Bats Trophy. The “wild card” winner drawn from teams not in top 2 was: Adam Cress, Mike Weber, Mike Miller and Tom Schmoll. The Champions each received a complimentary round at Creeksbend as a $50 giftcard from Lakers Tavern, Runner Up team each received a $25 giftcard for Lakers Tavern while the “Wild Card” *3rd place was awarded $80 cash. In addition to golf winners, 20+ raffle tickets were drawn for the Fabulous Prize Table. 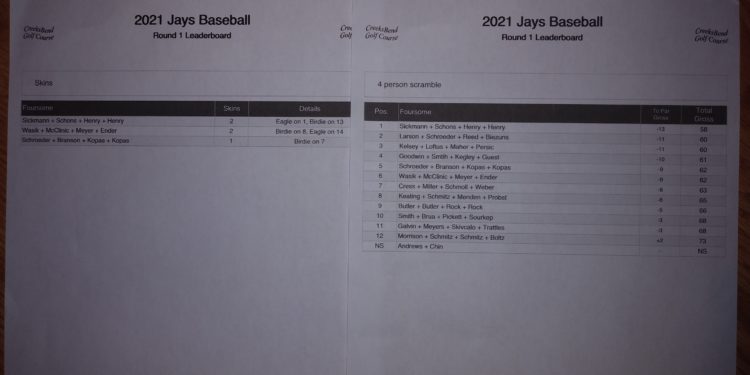 THANK YOU to all of our participants! Check back for 2022 events…