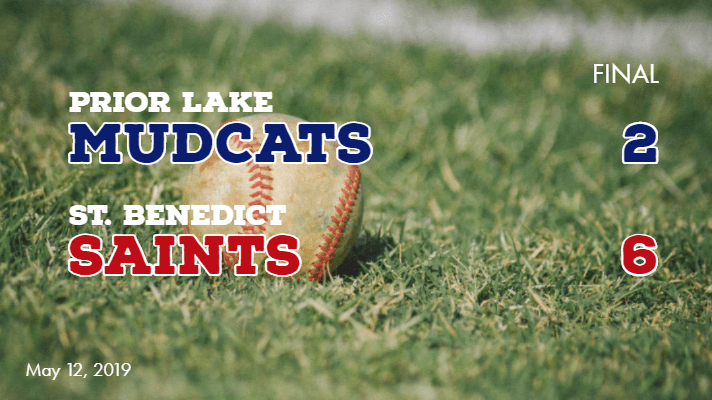 Not a bad Sunday to celebrate all of the mothers out there and catch an afternoon baseball game with temperatures in the low 60’s under partly cloud skies. But things didn’t play out in favor for our “Local 9” today in their 6-2 loss to the St. Benedict Saints.

Both teams got on the board early tying 1-1 in the first inning. The Saints would find some consistency taking advantage of base runners and scoring at least one run in the 3rd, 5th, 6th, and 8th innings.  Homeruns by Greg Faue and Jonny Houston wouldn’t be enough for the Mudcats to pull through.  Michael Walerius who made his debut with the Mudcats today went 1 for 3 and reached on balls.

Justin Hackett started on the mound of the Mudcats pitching five innings, allowing eight hits on five runs with four walks and four strikeouts.  Hackett would be replaced by Luke Weber in the sixth facing nine and striking out three while walking four.  Isaac Saad would take over in the eighth and allowed one run on one hit.

The Mudcats take a well deserved break before heading to Lonsdale on Friday, May 17th to take on the Aces at 7:30 pm.  The Lonsdale Aces had a record of 1-1 coming into this weekend.  The Mudcats come into next Friday’s game with a record of 2-2.

This Week at “The Vet”