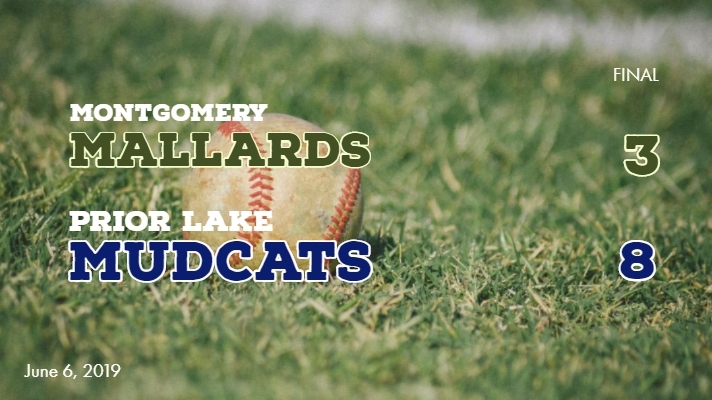 The Mudcats are on a three-game winning streak with their latest 8-3 victory last night  over the Montgomery Mallards.  An early Mallard error allowed the Cats to plate their first run in the bottom of the first inning.  The Mallards answered back the next inning with a run-scoring sacrifice fly to tie the game.  In the third, the Cats would put two more on the board with a two-run homer by Jake Lehrer bringing them ahead 3-1. In the fourth, Montgomery scored another run on an RBI single by Aaron Dwyer.

Beyond the fourth inning, the Mallards bats would be silenced while the Mudcats chalked up three more runs in the fifth off of an RBI single by Lehrer and two-run single from BJ Benz.  The Cats would bring a run across in each the sixth and seventh innings with solo shots by Jonny Houston and Lehrer.

Ben Morrison threw seven solid innings for the Mudcats allowing two runs on seven hits, walking one and striking out four.  Justin Hackett would pitch the last two innings only allowing one run and one hit.  Morrison was the winning pitcher.

The Mudcats take a few well-deserved days off before traveling to St. Patrick on Sunday, June 9 for a 2:00 pm first pitch against the Irish.  The Irish’s Bonin Field underwent a fantastic renovation in the off-season, so a backstop dedication ceremony will follow Sunday’s game.