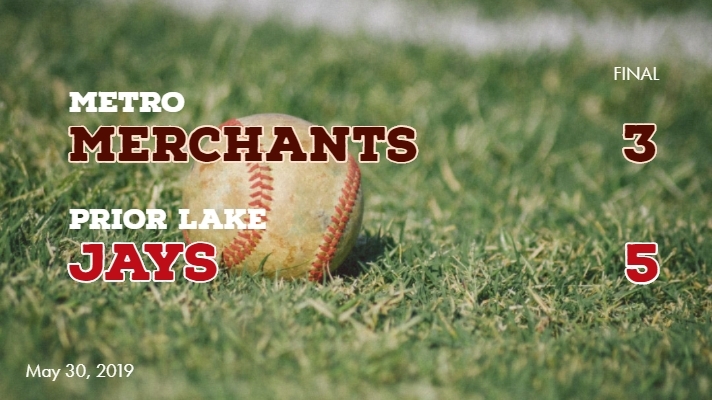 The Prior Lake Jays took home a 5-3 victory over Metro Merchants on Thursday.

Ben Koopman took the win for Prior Lake Jays. He surrendered three runs on seven hits over five innings, striking out four and walking zero. Brandt Broderick, Zach Matthews, and Mitchell Goodwin all put in work in relief out of the bullpen, steering their team towards the victory. Goodwin recorded the last out to earn the save for Prior Lake Jays.

Joe Perzel took the loss for Metro Merchants. He allowed five hits and four runs over three innings, striking out one.

Jared Deutch started the game for Metro Merchants. He went four innings, allowing one run on three hits, striking out two and walking one

Keating led Prior Lake Jays with two hits in four at bats.

The Jays are back in action again on Sunday, June 2nd when the Beavers of Highland Park visit Prior Lake for a 6:00 pm match-up.

Portions of this recap are powered by Narrative Science and GameChanger Media. Copyright 2019. All rights reserved.