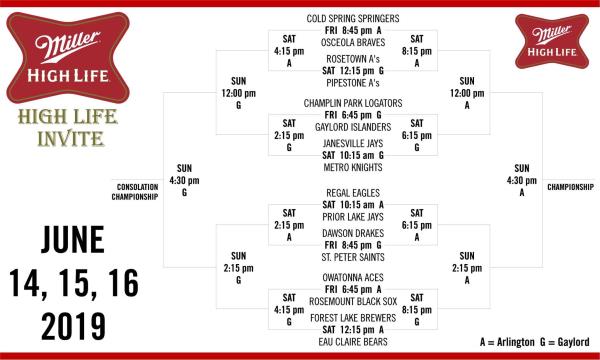 The Prior Lake Jays are one of 16 teams that will participate in the 2019 Miller High Life Invitational Tournament hosted by the Gaylord Islanders and Arlington A’s this weekend, June 14-16.  The field includes four teams from MBA Class ‘B’, two teams from MBA Class ‘A’, two state champion teams from Wisconsin, as well as seven MBA Class ‘C’ teams and the Blacksox from the Twin Cities Men’s Adult Baseball League (TCMABL).

The brackets have been locked and the tournament is set to kickoff on Friday, June 14th at 6:45 pm with games in Gaylord and Arlington.  The Jays will play their first game on Saturday, June 15th at 10:15 am against the Regal Eagles at Arlington Ball Park.  A win in the first game would put them in the championship bracket along with a second game to take place at 6:15 pm Saturday night.  A loss in the first game would put them into the consolation bracket with a second game to be played at 2:15 pm Saturday afternoon.

For full tournament updates, follow @ArlingtonAsMN, @GaylordIslander, and @CoachReichy on Twitter.  Call the Nuvera Prior Lake Hardball Hotline at 952-226-3800 for the latest on how the Jays do in the tournament.

If you’re interested in checking out some tournament games this weekend, here are the addresses of the ballparks: