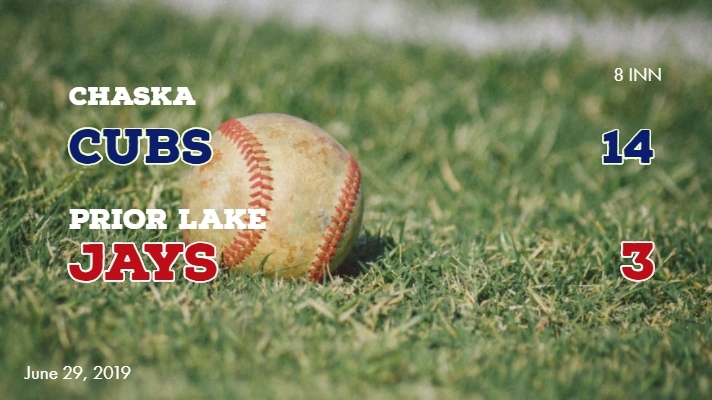 Friday was a long day for the Prior Lake Jays, falling to the Chaska Cubs 14-3 in eight innings at Veterans Field in Prior Lake.

The Jays opened up scoring quickly in the first inning when Jonesy Buescher singled driving in Zac Repinski who had reached on his own lead-off double.

With a 1-0 lead through the first four innings of play, the wheels came off the wagon in the fifth when the Cubs pulled away for good with three runs in that inning and another seven runs in the sixth. Chaska accumulated five hits in those two innings along with two Jays errors. Two walks paired with a home run and a Jays error proved costly for our feathered friends.

Pete Ohnsorg earned the victory on the hill for Chaska. He allowed five hits and two runs over seven innings, striking out three and walking one. Andy Dauwalter threw one inning in relief out of the bullpen.

Ben Koopman took the loss for the Jays. He allowed five hits and three runs over five innings, striking out two. Zach Matthews thew one third of an inning in relief and Ben Eisenberg contributed two and two thirds. Jeff Butler went 2-for-4 at the plate to lead Prior Lake Jays in hits.

The Jays get the weekend off before returning to action on Monday, July 1 when they travel to Burnsville to take on the Bobcats at Alimagnet Park. First pitch is 7:30 pm. They’ll return home on Tuesday night to take on the Chanhassen Red Birds at The Vet, 7:30 pm is game time.

You can watch the full replay of the Chaska Cubs vs. Prior Lake Jays game streamed live here with color commentary by Dick “Voiceman” Carlson.