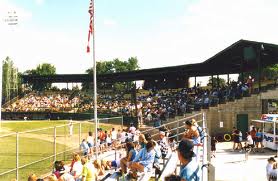 PL Jays 10-0 Sioux Falls Saints
The Jays gave the ball to Ryan Mestnik for their opening game of the Spamtown Challenge VS. Sioux Falls. Mestnik was getting his 1st Jays start after returning from a stint with the Alexandria Blue Anchors of the North Woods League and a MIAC All Defensive team honor with the Augsburg Auggies this Spring. Following consecutive 1-2-3 innings, the Jays exploded for 7 runs in the bottom of the 2nd inning on 2 walks and 6 hits including consective doubles doubles by catcher Chris Sticha and rightfielder Adam Cress. With Mestnik cruising, he faced 2 over the minumum yielding 1 walk in the 5th inning and 1 hit in the 4th, the Jays ended the tilt after plating 3 runs in the bottom of the 5th. With secondbaseman Jim Schroeder and rightfielder Adam Cress reaching on balls and 1 out, leftfielder Reed Zweber cleared the bases with a 2 RBI double. After advancing to 3rd base on a wild pitch shortstop Chris Kelly ran the count full before a single to drive in Zweber and end the game in 5 innings. Reed Zweber 2-2 2 runs, walk, 3 RBI, Jim Schroeder 2-2, 2 runs, 2 RBI and Adam Cress 1-2, 2 runs, walk 2 RBI led the Jays batters while Mestnik pitched 5 scoreless with 1 hit, 1 walk and 6 strikeouts to bag the win on the hill.

Cold Spring Springers 2-1 Prior Lake Jays
The Springers capitalized on a dropped foul ball on a blustery Austin day plating the 1st batter of the game who scored following a Jays error and a single. Starting pitcher Chris Kelly dialed in blanking the Springers for 5 innings before allowing a lead off hit and stolen base/overthrow of 2nd before being the Springers leadoff hitting centerfielder Brian Hanson knocked in the game winner. Jays pitcher Kelly was stingy allowing only 4 hits and walking one while striking out 5. Both Springer runs were unearned. The Jays had 2 on in the 7th stranded with Springer Sean Terres striking out the last 2 batters to get the win. Jays batting leaders were centerfielder Tony Doherty who was 1-2 while also reaching on balls and catcher Sam Hoppe who was 1-1 and scored the Jays lone run in the 7th. Kyle Zweber, Chris Sticha and Chris Kelly also tallied hits in the loss.
Cold Spring 100 000 1 2 4 0
PL Jays 000 000 1 1 5 3

Minnetonka Millers 6-1 Prior Lake Jays
The Jays squared with the defending Spamtown Champions needing a win to advance to Sunday bracket play. Given the 5 inning 13-0 beatdown in PL the prior Tuesday, it’d be a tall task for the Jays. Starting pitcher Kyle Zweber blanked the Millers in the 1st inning who batted 8 in the 2nd plating 3 runs on 4 hits and a walk. The Jays lone run posted in the 4th when Reed Zweber got a single, stoled 2nd base then was knocked in by a Tony Doherty single to right field at historic Marcussen Park making the score 3-1 Minnetonka. The Jays kept on Millers starter Derek Mason in the 5th when leadoff hitter Brandt Broderick reached on balls and rightfielder Adam Cress got drilled but were unable to plate further runs stranding 5 on the day. After 0 in the 4th and 5th the Millers tallied 3 in the 5th inning on back to back home runs by Mike Davis (2RBI) and tourney MVP Blaine Rutledge who knocked a solo shot. Nick Anderson releived Zweber tossing a 1-2-3 6th. Minnetonka would defeat the Shakopee Indians 6-2 and captured it’s 2nd consecutive Spamtown title beating the host Austin Greyhounds 8-0.

The Prior Lake Jays have submitted the following to the RVL Commissioner for consideration to represent the PL Jays at this years All Star Game: Adam Cress, a mainstay in the Jays outfield and 1999 Jays rookie, 2nd baseman Jim Schroeder who has also played shortstop and produced at the plate for the Jays and a 2006 Jays rookie and Chris Kelly who joined the Jays in 2011 and was 2013 All MIAC as a pitcher at Gustavus but also a capable middle infielder and hitter. The Final RVL team roster should be announced this week. The Jays have had multiple players capture MVP honors including Kyle Zweber, Dusty Olynyk and Ryan Mestnik in previous RVL VS DRS All Star Games. Olynyk also capture HR Derby Title at Union Hill and represented the Jays also with Kyle Zweber in the RVL VS St Paul Saints game 2 seasons ago. The 2013 RVL VS DRS All Star Game will take place Friday July 12 with the game starting at 800PM to be preceeded by Homerun Derby and team introductions at 730.