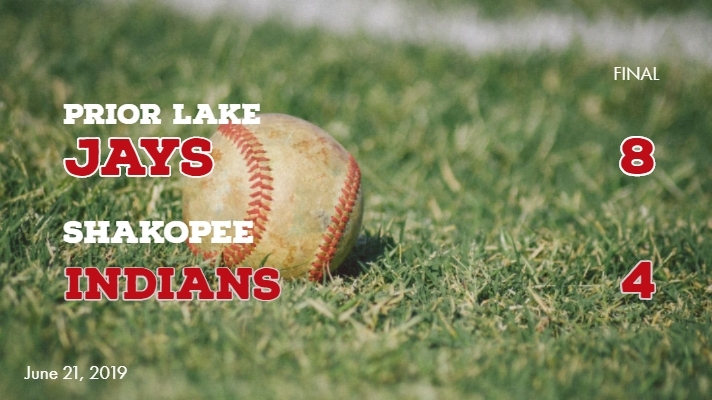 The Prior Lake Jays nabbed the lead late in the game in an 8-4 victory over the Shakopee Indians on Friday night. The Indians scored three runs in the sixth inning, but Prior Lake still managed to pull out the victory. With the game tied at four with the Jays batting in the top of the seventh, Sam Tanner singled on a 2-2 count, scoring two more runs.

Prior Lake Jays racked up ten hits on the day. Rob Frederick, Joe Loftus, Jeff Butler, and Kelsey each collected multiple hits for Prior Lake. Kelsey, Butler, Loftus, and Frederick all had two hits to lead the team.

The Jays are back in action Sunday night when they travel to Victoria to take on the Vics for more Section 3B action.  Game time is set for 6:00 pm at Poppitz Field.

Portions of this story Powered by Narrative Science and GameChanger Media. Copyright 2019. All rights reserved.