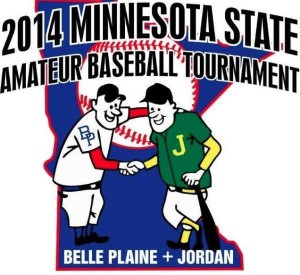 ‘Cats Dropped In Region Finals But Represented At MBA

The PL Mudcats were downed by St Benedict in their quest to return to the MBA Class C State State Tournament. In the elimination game, St Benedict prevailed 8-5 to advance to their 2nd consecutive MBA Tourney.

Draftees from the Mudcats representing and continuing as pitchers include: Ben Morrison and Brad Schoenrock (New Market Muskies) and Jake Schmidt (St Patrick Irish). These players will join their respective teams, available to pitch in the MBA Class C State Tournament. GOOD LUCK to the DRS at MBA.

FULL MBA B & C Tourney Update at bottom of this page…

The host Vics talled 2 in the 1st, 3 in the 3rd, 2 in the 4th and sealed the big win with 3 in the 8th led by CF Brandon Arnold & 2B Greg Winegarden 3-4 3 runs each and took advantage of 3 Jays errors picking up 9 hits. The Jays also stranded 9 runners and struck out 12 times to Vics starter Rollie Lacy who yielded 5 hits and 2 walks. RF Adam Cress plated the lone Jays run in the 3rd drawing a 1 out walk and was doubled in by CF Jonesy Buescher who led the Jays hitting going 2-4 with 2 doubles and an RBI. PL starting pitcher TJ Larson pitched 6 striking out 13 Vics yielding 3 walks and 7 hits.

The Vics traveled to Veterans Field of Memorial Park with a 1-0 series lead and tallied the margin in the 4 run 4th with a single by catcher Eric Winegarden whole stoled 2B followed by RBO double by LF Matt Mann, RBI single 1B Sam Rothstein and a 1 out RBI walk to SS Tony Kjolsing which was followed by a 2 out RBI double by RF Adam Diettric off of Jays starter Nick Anderson who threw 7 innings yielding 6 runs. The Vics tallied 2 in the 7th on a Jays error which scored Mann on a Chris Volkman blast to RF. The final Vic run scored on walk to Eric Winegarden, Single by Mann, hit batter got Chris Volkman on and a single by Kjolsing in the 9th on Jays reliever Brandt Broderick who threw a scoreless 8th. Vic Binger struke out 6 walking 2 while Ralston struck out 1 walking 2 in 2 innings work. The Jays could tally only 2 hits, 1 each on starter Corey Binger and reliever Kasey Ralston by CF Jonesy Buescher and 3B Ryan Mestnik. The Jays stranded 8 runners threatening in the 3rd with bases loaded and stranding 2 in the 9th.

The pesky PL Jays travelled to Victoria down 0-2 in the best of 5 Section 3B Series and prevail on a strong 9 inning pitching effort by TJ Larson with 8K and 4BB. Chris Kelly had the door slamming win in relief facing 4 in the 10th yielding a hit to Nick Volkman and in the 11th facing 3 striking out Sean Hennen & Eric Winegarden to end the game and extend the series. The Jays had 5 different players tally RBI in the win.

The Jays took a 4-3 lead in the 6th on a monster blast by 3B Ryan Mestnik to RF that cleared the scoreboard in deep Poppitz Field of Lions Park. The Jays plated their 5th run on 1B Geisler single and got to 2nd on a fielders choice by Chris Kelly. With 2 down DH Dan Schroeder hit a ball that was lifted to shallow RC field and dropped allowing pinch runner Brandt Broderick to score from 2B.

The Vics fought back on Larson tying the game in the 9th plating 2 runs on 3 hits. Victoria had Alex Sommer solid in the start for the Vics tossing 7 yielding 4 runs in front of 2 costly Vic errors and the loss taken by Chris Choles who pitched the 11th inning. Choles with a 5-5 score struck out Geisler before 3B Ryan Mestnik ripped a single and advanced to 3rd on Chris Kellys single. With 1st and 3rd Choles struck out Dan Schroeder before catcher Chris Sticha delivered the winning run knocking in Mestnik on a 2 out full count single before Kellys 1-2-3 bottom that had the last 2 outs as strikeouts.

The PL Jays returned home for an elimination game and the home fans were restless as the Vics posted 3 in the 1st on a Rothstein hit, Eric Winegarden double and Matt Mann blast to left field off Jays starter Nick Anderson. Lefty Anderson settled facing 3 in the 2nd and 4 in the 3rd inning allowing 0 runs. The Jays answered on a leadoff hit batsman to RF Adam Cress followed by CF Jonesy Buescher reaching on balls for 2B Jim Schroeder. Schroeder laced an RBI double plating Cress and LF Dusty Olynyk plated Buescher on a groundout to short. Following a single by 3B Ryan Mestnik, 1B Scott Geisler plated and RBI groundout scoring Schroeder and the Jays stranded Mestnik but knotted the game at 3-3 after 3 innings. Anderson faced 4 blanking the powerful Vics in the 4th but was chased from the game in the 5th getting credited for 5 Vic runs on consecutive 1 out doubles to Winegarden and Mann followed by a Jays error at 3B and a walk. Tyler Edwards replaced Anderson and following 2 straight Vic hits to clear the based recorded the final 2 outs in the 5 run 5th.

The Jays batted 5 in the 4th stranding 2 on singles by Buescher and Cress and had a 1-2-3 6th & 7th frames off Vics reliever Corey Binger. Edwards dialed in some funk on the mound and kept the Vics off balancefacing 4 in the 6ths and 7th before allowing a run on a 2 out Winegarden single and Mann RBI single in the 8th plating the 9th Vics run. The Jays answered in the bottom of the 8th on a 1 out single by 1B Scott Geisler advancing to 2nd on a single by SS Corey Goodwin. Veteran Geisler on 2B, walked off ripping 3B on a steal, as Goodwin followed him to second the Vics Winegarden fired an errant throw allowing Geisler to score the final Jays run. Brandt Broderick walked 1 and struck out 1 in the top of the 9th and the Jays had Cress & Buescher reach on balls trying to extend the season but a strikeout and double play hit into by pinch hitter Pat Galvin ended the game and 2014 Jays season losing 9-4.

UPDATE: The Vics and Shakopee played for seeding Sunday 8/17 and apparently enacted a new rule agreeing to play a rain shortened game with Victoria prevailing 4-0 after 4 1/2 innings to capture #1 seeding for MBA bracket. GOOD LUCK to Shakopee and Vic at MBA in representing the RVL and Section 3B!

The 91st Annual 2014 Minnesota Baseball Association State Class B & C Championships are being hosted by Belle Plaine Tiger Park, Jordan Mini Met & LeSeuer Bruce Frank Field August 15-17, 22-24 and 29-31 with Champions in MBA Class B & C crowned Labor Day Monday September 1 at Belle Plaine and Jordan. Local Teams: St Benedict, New Market, St Patrick, Faribault of the DRS League and Jordan, Belle Plaine, St Peter of the RVL are competing in the Class C Championship with Shakopee & Victoria of the RVL and Elko of the DRS as well Burnsville and Eagan of the Cannon Valley League are in the 16 team Class B Championship bracket. Cost for admission is $7 Adults and $4 for students with 12 and under free. SUPPORT MBA TOWNBALL!

CHAMPIONS TO BE CROWNED, LOCAL UPDATES (8/27)

In Class C MBA State Tournament action 4 local teams have survived to advance to Championship weekend final 16 action in the single elimination tournament. Belle Plaine & St Peter of the RVL joined St Benedict of the DRS in elimination getting dropped last weekend while Jordan of the RVL as well as St Patrick, New Market and Faribault of the DRS have advanced with hope of playing Labor Day to take the Class C title.

In Class B #1 Victoria was dropped by St Cloud Beaudreaus while the Shakopee Indians of the RVL and Section 3B, 2013 MBA Class B Runner Up, pounded Forest Lake 15-5 and Section 1B Champion Elko Express advanced past Isanti and are in the Final 8 of the MBA Class B single elimination bracket. Schedule as follows:

The 4 winners square Sunday to determine who will square for the Championship on Labor Day.