Mudcats clipped 3-2 in the bottom of the 7th by grieving host Green Isle Irish at the 2013 GI/Hamburg Miller Lite Invitational Tournament. BJ Benz got the start on the hill with no decision with Brad Schoenrock taking the loss in relief. Jerad Lehrer bagged 2 rips and scored once, Mason Holmquist also picked up 2 rips with RBIs from Levi “2 nuts” Schneider and Ryan DeFries. Fud “The Greek” Faue will dial up a new plan as the ‘Cats try to capture the Consolation bracket title starting at 130 Saturday 6/22 at Irish Yard as they take on the Chanhassen/Avon loser from Friday night action. Tourney action was scrapped following torrential rains in the area Friday. The Mudcats have a busy week on tap travelling to Lonsdale Trenda Memorial Park Tuesday before a makeup with New Market in PL Thursday and a special 615PM 1st pitch at St Patrick Friday. 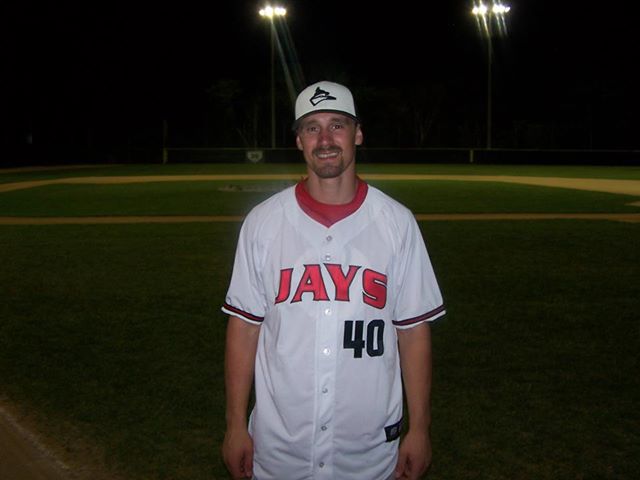 The PL Jays and River rats battle tight early before Jays post 7 runs in the 7th inning to bag a win on Military Appreciation Night 2013 10-0 in 8 innings. The Jays capitalized on 9 Rat walks issued and 4 hit batters with 5 of the passes haunting the ‘Rats on the board in the form of runs and a walkoff walk to Scott Geisler that forced in Adam Cress to end the tilt. Firstbaseman Dan Schroeder 2-4/3 runs/Walk, Adam Cress 2-4, run/walk and Reed Zweber 2-4 run/walk led a lockdown 7-8-9 batting slot attack for the Jays. USN officer candidate Jake Pieper was solid at the dish on defense and 0-2 batting reaching on balls, getting drilled and scoring in the 7 run 7th inning swarm. He was given a warm round of applase by the Military Appreciation Day crowd of fans, friends and family upon his replacement in the game. Special Thanks for PL VFW Post 6208 Color Guard, Auxillary and Commander Ed Speicher for his pre game speech to the assembled crowd as well to the City Of Prior Lake for assisting in providing a great night of baseball at Veterans Field of Memorial Park. Thanks as well and good luck to the RiverRats who played tough behind starting pitcher Dave McDonald who got the loss. Jays pitcher Nick Anderson got the win on the hill for the host Jays. Thanks to Jake and his family for helping make a great night at the park as well best wishes from PLABA & the PL Jays, Team USA picked up a nice addition.

The Jays were cancelled at Victoria when a wall of water and 50MPH wins blew away chances for Friday night Section 3B action. The Jays travelled to Shakopee Joe Schleper Stadium of Tahpah Park Sunday for Section 3B RVL East action and unlike the wire walking guy across the Grand Canyon, not successful. They were dropped 7-2 to drop to 0-3 in the 9 game seeding portion of the schedule. Pat Lenton toed the hill for the natives going the distance walking none and striking out 3 while scattering 11 hits and stranding 9 runners. Kyle Zweber got the loss pitching for the Jays yielding 7 runs, 11 hits, 4 walks and 1 drilled Indian. Rookie Brandt Broderick got his 1st up for the Jays and allowed 0 runs in 2 innings work allowing 2 hits, 2 guys reached on balls and Joey Heller the victim of a future trivia question about his 1st RVL strikeout. 1B Scott Geisler provided a 3-4 hitting effort scoring once and Dan Schroeder 2-4 Run and LF Adam Cress 2-4 RBI led the Jays batting lineup. Wasiloski 3-5 2 runs/double, Dolenc 3-5 run/double and Hentges 3-4 and reaced on balls led the Shakopee offense on a good night for ball at “The Schlep”. (CLICK FOR RVL RECAP)

The Prior Lake Jays welcomed Class A powerhouse Minnetonka Millers to a sultry night at the Vet for non league action Tuesday 6/25 and got thumped 13-0 in 7 innings. The Jays got leadoff hitters on in 5 of the 7 innings but were unable to convert any into runs. Fan were treated to a Miller power hitting exhibition that included 5 HR, 2 no doubters by Miller shortstop Joe Schallenberger who was 3-5 scoring 3 runs. The Miller bats cleared the batters eye, OF trees and were reported to be picked up by the Norad as foreign objects. The Millers tallied 18 hits while the host Jays tallied 7 hits by 6 batters and led by outfielder Jeff Butler in a 2-2 effort that included a stolen base. Butler also had a highlight play late in the game, scaling the fence to capture another likely Miller HR as well there was a ball that hit at the top of the fence and netting that was ruled a hit and could have ruled as a 6th Tonka bomb. Jays starting pitcher Nick Anderson got up in counts but unable to record outs allowing 9 runs in 5 innings work while reliever Pat Galvin worked a scoreless 6th before getting 4 runs hung on him in the 7th. The Jays bats threatened in multiple innings including the 7th needed 3 to play on, the Jays shortstop Kyle Zweber reached on a single which was followed by Chris Sticha reaching on balls before rightfielder Adam Cress ripped a perfect setup hard down 3B line that recorded a 5-4-3 “walkoff” triple play to end the Jays chances and the game.