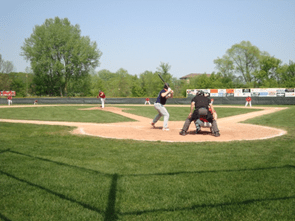 The PL Mudcats (2-1) traveled to New Market (5-0) for their first “fishfight” of 2016 hoping to continue their quick start in DRS League action and were upended 6-2 on a beautiful day at Hillside Park in New Market.

The large crowd saw the ‘Cats plate one run in the first inning that were answered by the Muskies by two runs in the bottom half and two additional runs in the second inning on Mudcats starting pitcher Johnny Houston. Houston would last five innings yielding four runs; all earned. Topher Rose made his first appearance of 2016 yielding the other two Muskie runs, also earned. Both Mudcat hurlers combined for nine strikeouts working out of jams and allowed six Muskies to reach on balls. The Mudcats second run scored in the third inning on a Brad Schoenrock RBI single off New Market starter Derek Bergstrom who scattered eight Mudcats hits walking one while striking out nine in the complete game win. The visiting Mudcats threatened several times but were unable to string together hits stranding six runners in the loss. The host Muskies were led by the newly-added Henkemeyer brothers (Andy/Kyle) who combined 4-8 scoring two runs with 2 RBI in the New Market attack.