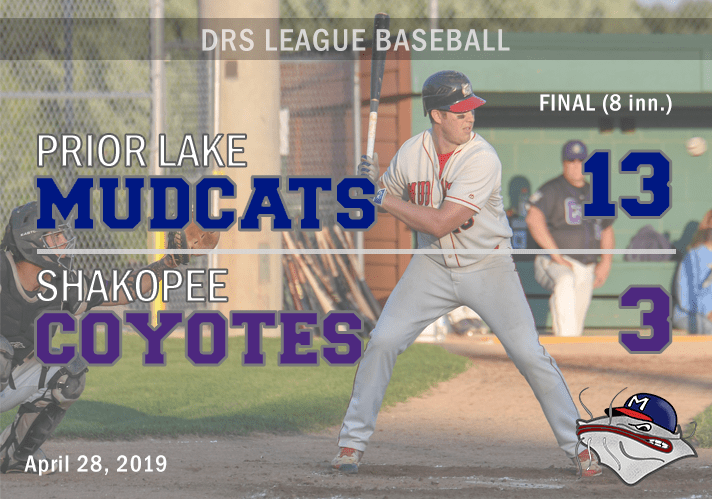 The Mudcats were scheduled to take the field on Saturday in exhibition action, but the possibility of snow and cold temperatures foiled those plans.  Sunday would bring the season opener and although snow wasn’t quite in the forecast, temperatures 10-15 degrees below normal and winds gusting to 20 mph were.

It took five scoreless innings before the Mudcats bats went into action.  Luke Weber led off the top of the sixth inning with a single and a stolen base and Cole Bjorge reaching on a single.  With one out, Jake Lehrer hit a sacrifice fly and reached safely on an error scoring Weber.  Several wild pitches later, Lehrer and Levi Schneider who reached on a walk, both score.  With bases loaded and back at the plate, Weber singles scoring two more for the Mudcats before Bjorge singles again clearing the bases.  Additional hits by Jonny Houston and Jake Lehrer tally more runs as the Coyotes look to their third pitcher to take over from the bullpen.  The Mudcats mark nine runs in the sixth on four Shakopee errors.

Ben Morrison got the call throwing five complete innings for the Mudcats allowing only two hits and throwing a chair to six Coyotes caught in the headlights.  Justin Hackett took over in the sixth inning giving up three runs on six hits, walking two and striking out four.

The Coyotes scored one run in the eighth inning off of a home run by Zak Hoffman, but couldn’t string enough together to make it to the ninth.

The Mudcats are back in Prior Lake at Veterans Field for their Home Opener on Sunday, May 5 at 2:00 pm taking on the New Market Muskies.