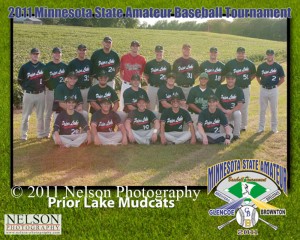 Mudcats Pull Down Sox to Advance to Final 16.

The PL Mudcats have flirted with the MBA State Class C Tournament 2 times in their history losing in the final 3 of Regional playoffs but have never advanced from Class C Regional playoffs to the State Tourney. The streak, since 1991, has been broken and the Freeport Blacksox dropped 5-4 in which the ‘Cats never trailed after posting a 2-0 lead in the 1st frame. Jake Schmidt got the nod on the bump and bagged the win with a big save to Derek Bergstrom from the New Market Muskies. Ironically, the PL Jays, who started the Mudcats in 1991 as a spin off played their 1st MBA State Tourney in the 1987 season at Brownton & Glencoe which was their 1st as a team. The ‘Cats grabbed the magic and overcame mistakes and capitalized in Sox errors in the win.

PL Mudcats at Brownton VS Waconia Friday 8/26 730PM. The PL Mudcats captured the early lead 1-0 on Waconia draftee Wischnack and locked horns in an epic State battle with Ben Morrison on the hill for the ‘Cats. The see saw affair was not settled until the bottom of 14 on a pick off to 1B by ‘Cats draftee Derek Bergstrom from New Market that 1B Casey Johnson was not able to handle scoring the runner from 3B. Waconia takes on the Winner of Maple Lake VS New Prague. Waconia Lakers VS New Prague Orioles Sunday 8/28 130PM at Brownton in the Final 8-Double Elimination round. The game eliminates the Mudcats who went 1-1 in their 1st State MBA Class C appearance and had contributions up and down the roster all season long. Good Luck remaining teams and thanks to fans and friends for your support throughout the PL Mudcats historic 20th season of townball.

THANK YOU to the great following of fans, get your Red, White and Blue…