A relatively slow start for the Mudcats with three hits through the first three innings would be short-lived as in the 4th inning they score their first run. The Cats would strike again in the 6th inning when Topher Rose walks and then scores off of a Greg Faue single. 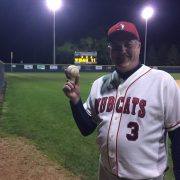 Player Manager Greg Faue holds the winning game ball from the Mudcats 12-0 win over the Lonsdale Aces on May 17, 2019. Photo Credit: @PLMudcat

In the 7th inning, Like Weber doubles off of Tyler Milford. Jonny Houston would then single moving Weber to third before Weber is tagged out at the plate on a Corbin Cross fielder's choice. With one out and bases loaded, Michael Walerius would hit a single scoring Houston and moving Cross to third and Benz to second who reached on a walk. Additional base hits from Rose, Faue, Weber, and Cross would plate five more runs bringing the 7th inning tally to seven for the Mudcats.

The 8th inning would bring more of the same including RBI singles for Nolan Rein and Weber. In total, three more runs would cross the plate to end the inning.

The Mudcats will finish this stretch of road games on Wednesday, May 22nd when they make a stop by the Elko Ball Field to face the Express at 7:30 pm. Elko, who is the only Class 'B' team in the DRS league is currently 2-0, while the Mudcats are currently in 3rd place with a record of 3-2.