The PL Mudcats were dropped in DRS Red Division deciding game 3 @ St Patrick Sunday 7/29 12-8 losing the best of 3 series for Region playoff seeding. They spotted the host Irish 7 in the 1st inning off of Mudcats starter Ryan White(L) and rallied from 11-0 deficit in the 5th posting 5 runs as well as 3 in the 9th to get the tying run to the on deck circle in the 9th. Bill Dunker got the win for St Patrick with Josh Simon closing the door with the save. The ‘Cats had big days at the plate from BJ Benz 4-5, Gary Mariscal 3-6 and Noah Rezac 3-5. The Mudcats bounced back in hosting Webster Sox in an elimination game Tuesday 7/31 and jumped out early with 8 runs in the first three innings to rout the Webster Sox in the first game of Region 3C play. The Mudcats score 2 runs in the 7th to end it with a 10-0 Mudcat WIN. Sean Greywitt tossed a two hitter in the seven inning complete game shutout. Greywitt struck out eight and walked two. Leading the Mudcats hit parade were: Noah Rezac 3-4 3 runs RBI double and Casey Johnson 2-4 Run 2RBI. 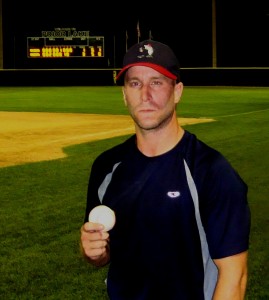 The top seeded Prior Lake Jays were regular season Champions of the RVL East Division (Section 3B) by posting a 6-3 record going 2-1 against each of the Division/Section teams. The #4 seed Chaska Cubs were beaten 4-1 by the Jays at Athletic Park June 19 and at Veterans Field in PL July 8 by a 4-3 score while taking the Jays 7-3 on July 17. Section 3B is playing best of 5 series to determine which 2 teams with advance to play in SuperSection Final 16 of MBA Class B at Shakopee & Chaska sites. The winner of the #1 Prior Lake Jays VS. #4 Chaska Cubs Series will face the Winner of the #2 Victoria Vics VS. #3 Shakopee Indians to determine Section 3B Playoff Champion/Section seeding. That seeding game will be hosted by Prior Lake, Victoria or Shakopee depending on outcome of the series. Red Wing and Elko are also SuperSection Final 16 host sites, each hosting a 4 team double elimination tournament 8/17-19/2012 playing down to a MBA State Class B Championship 8 team double elimination bracket.

BOTH Seed game teams advance to B Super Section Final 16 4 team double elims. 3B will play at Chaska or Shakopee/PL Sites. THANK YOU for your support in 2012 of the Prior Lake Jays and RVL/MBA Townball!

**NOTE on Playoffs for VetPASS’12 Season Pass holders: The Region 3C/Section 3B charges admission for all playoff games. Bring your VetPASS’12 to all PL HOME games and there will be concessions discounts offered during the games announced!