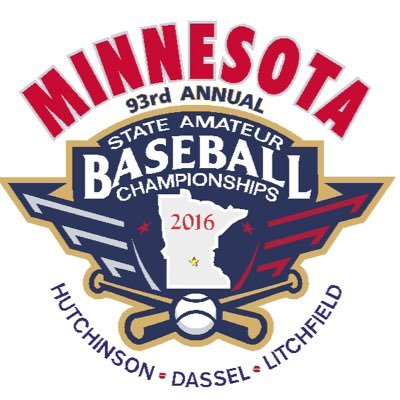 The Prior Lake Mudcats fought to the final day of the 2016 DRS League regular season to secure a higher seeding for playoffs dropping to St Patrick (#2) 6-4 on July 24 locking them into the #3 seed for the Region 3C playoffs. Securing the “top 4” position did allow the ‘Cats a bye in the 1st round DRS playoff series and home field in the Region 3C bracket, a double elimination among remaining teams. In Game 1 of the bracket, the Mudcats thumped the Shakopee Coyotes for the 3rd time in 2016 12-2 in 7 innings.

In Game 2 of the bracket, the Mudcats would be playing at home for a 2016 MBA Class “C” State Tournament slot versus the #7 seeded Union Hill Bulldogs. The ‘Cats had handled the ‘Dogs May 1 13-4 and July 20 by the score of 10-5 but with a bid on the line a battle was certain to happen.

The Bulldogs would send Dan Feneis to the hill to square against the Mudcats Topher Rose on Wednesday 8/3. Both teams were scoreless in the 1st 4 innings in a pitchers dual. Jerad Lehrer plated the 1st run of the game in the 5th on his 2nd at bat singling and advancing on a Levi Schneider groundout to 2nd that was followed by a Johnny Houston single before Cole “Mr 30” Bjorge hit a 1 out fielders choice to 2nd scoring Lehrer. In the 8th inning, the Bulldogs scored following a leadoff double by Nathan Berg and sac bunt by Matt Beckius but Berg was cut down at home on a Adam Giesen hit to Lehrer that was thrown to Schneider for the 2nd out. Giesen scored tying the game at 1-1 on a Bryan Linder double. After a scoreless 9th and 10th the PL faithful held on as Topher Rose was replaced by Justin Hackett on the mound and gave up a single, error by ‘Cats 3rd baseman Morrison then a fielders choice with Hackett firing to 3rd to get the 1st out and lead runner Linder. After Hackett plunked Eric Bisek to load the bases, wiley DRS Union Hill vet Jesse Bastyr ripped a 1st pitch to shortstop Houston who fired home for the 2nd out. With bases still full of Bulldogs, Jeff Dietz stepped to the plate and down in the count Hackett threw a ball Schneider was unable to block leading to Adam Gill scoring on a passed ball and giving the Bulldogs a 2-1 lead before Dietz popped out to end the 11th. The Bulldogs would go to their 4th pitcher, Nathan Berg and Jerad Lehrer would reach on an error (his 3rd reaching on leadoff of an inning for the game) by shortstop Adam Gill. Schneider was drilled on a 1-1 count to put 2 runners on with no outs. Houston attempted to sac bunt the runners but Berg threw out lead runner, and potential tie, Lehrer at 3rd. With 1 out and 2 on, Cole “Mr 30” Bjorge ran the count full before hitting in Schneider to tie the game and advance Houston to 3rd base. Kyle Schmidt was walked to load the bases with 1 out before Jake Lehrer launched a ball to centerfield for an out that scored Houston to end the game a 3-2 11 inning win and State Tourney slot for the Mudcats on the walkoff. For Prior Lake fans, it was a consecutive night 11 inning playoff walkoff victory as the night before, former Mudcat Scott Geisler plated the winning run lacing a double in the PL Jays Section 3B series Game 2 with Victoria.

With the State Tourney slot secured the Mudcats would travel to Montgomery Memorial Park for the winners bracket final Sunday August 2nd playing for seeding amongst the 4 teams qualifying from Region 3C both for Tourney bracket position in the 48 team State Tournament as well draft position for pitchers from defeated teams in Region 3C. The Mallards had advanced defeating #4 seed Faribault Lakers 10-2 in their Game 1 7/31, then squeeking a 5-4 win over State Ranked and #1 seeded New Market Muskies 5-4 on 8/2.

For Game 3, the Mudcats sent Ben Morrison to the mound while the Mallards countered with John Krocak. Neither team scored in the 1st 2 innings. In the top of the 3rd, the Mudcats road fans were rewarded with a 3 run 3rd inning. Brad “the Blade” Schoenrock led off flying out to center. Levi Schneider reached on balls before Johnny Houston was hit by a pitch. Cole “Mr 30” Bjorge grounded out to 2nd to advance Schneider & Houston before Kyle Schmidt drew a 5 pitch walk to load the bases. 2015 PL Mudcats DRS All Star rightfielder Jake Lehrer, who has returned to form in recent weeks, ran the count full to get the runners moving and cleared the bases ripping a double to centerfield with 2 outs and a 3-0 Mudcats lead. The Mallards answered with 1 in the bottom frame for a 3-1 score after 3. Morrison was in cruise with the lead tossing zeros in innings 4-8. The ‘Cats plated 2 in the 8th on a Schoenrock leadoff single ripped to left on a 1-2 count and advanced to 2nd on a Schneider sac bunt. Following a walk to Houston, Bjorge singled to load the bases with 1 out. Kyle Schmidt ripped a sac fly to left plating Schoenrock. After Houston stoled 3rd, the errant throw allowed Houston to pause and then score making the score 5-1 Mudcats. After consecutive 1 out singles by Lucas Pumper and BJ Benz, Schneider ripped a double plating Pumper and advancing Benz to 3rd for a 6-1 score following Houstons strikeout to end the 8th inning. After a scoreless Mudcat 9th Jake Schmidt relieved Morrison who had allowed 1 unearned run on 3 Mallard hits in 8 innings work pitching. Schmidt walked 1 allowing no Mallard hits in his stint on the hill preserving a 6-1 Mudcat win.

The Mudcats await the winner of the Shakopee Coyotes at Montgomery Mallards game scheduled for Wed 8/10. The game was suspended by power outage at the “Big Empty”, Montgomery Memorial Park and will continue Thursday 8/11 8PM in the 2nd inning. The loser will be #3 seed from Region 3C (St Benedict #4 seed advancing to MBA “C” Tourney) while the winner will travel to Veterans Field of Memorial Park in Prior Lake Friday 8/12 730PM needing a win to force Sunday game and overtake PL for #1 seed.

**Saturday 8/13 Game at Prior Lake will also include Fan Specials at the Vet Cafe. Region 3C Charges admission but season passholders will also be rewarded with specials, BRING YOUR VETPass16!

*”If Needed” Game Sunday 8/14 ONLY if PL Mudcats lose 8/12. Montgomery/Shakopee need 2 wins vs PL for #1 Seed. Region 3C Draft of pitchers to follow conclusion of last playoff game at Prior Lake.