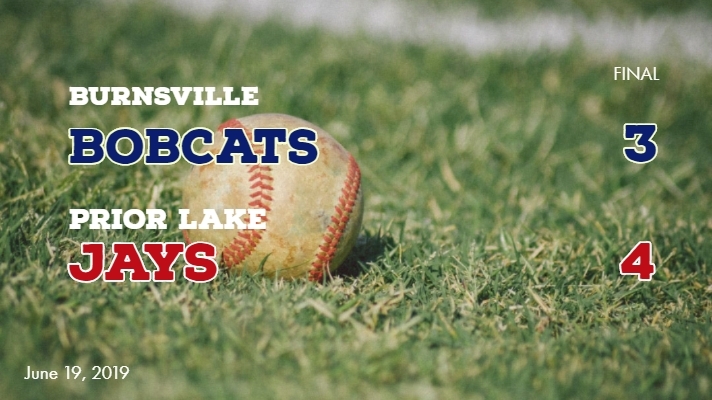 In an evening reminiscent of last year’s Section 3B playoffs against the same two teams where Tommy Keating’s walk-off home run in the bottom of the ninth inning would bring the Jays an elimination victory, last night played out in a similar fashion and Zac Repinski would provide the clutch that the guys in black and red needed.

In the bottom of the ninth with the score tied 3-3, Rob Frederick led off the inning with a hard ground ball in the shortstop hole, difficult enough that a bobble allowed him to reach base.  Frederick would advance off of a sacrifice bunt by Cody Kashmark; his  second of the night.  With one out, Frederick on second base, and a 1-1 count on Repinski, he drove a ball into the left field gap.  Frederick was green-lighted coming around third and reached safely on a very close play at the plate to win the game by a score of 4-3.

Bret Mitchell started on the mound for the Jays lasting five innings, allowing two runs on three hits and striking out 10.  Rookie Ben Eisenberg would come in on relief throwing the final four innings and allowing only one run on three hits, and was the winning pitcher.

Repinski was 2 for 5 (1 RBI) on the night with a triple and the game-winning double.  The Jays tallied seven hits in total with work by Tommy Keating, Joe Loftus (1 for 4, 1 RBI), Tyler Edwards, Frederick, and Jeff Butler (1 for 4, 1 RBI).

Next up for the Jays is a visit to the Shakopee Indians this Friday night (6/21) for another Section 3B seeding match-up.  Game time at Schleper Stadium is slated for 7:30 pm.