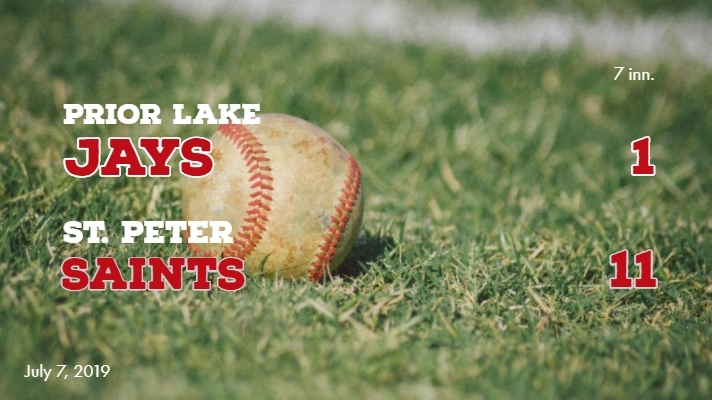 The Jays started off on a positive note with a 1-0 lead in the third when Mitchell Goodwin doubled, and then scored off of a double by Jonesy Buescher.  Unfortunately, that’s where things went sideways. After that, The Jays were held scoreless even with several scoring opportunities and seven team hits on the night.  St. Peter scored six runs in the seventh inning and tallied eight hits in the game to beat the Jays 11-1.

Ben Eisenberg started on the mound and in the end took the loss for the Jays. He went six innings, allowing five runs on seven hits while striking out two and walking three.  Zach Matthews provided relief, but gave up six runs (five earned) and walk five.  Ben Koopman would come in during the seventh inning pitching one third of an inning and allowing one hit.

The Jays are back at home Tuesday night against the Arlington A’s for a 7:30 pm game, and will travel to Burnsville for a makeup game on Wednesday at 7:30 pm.