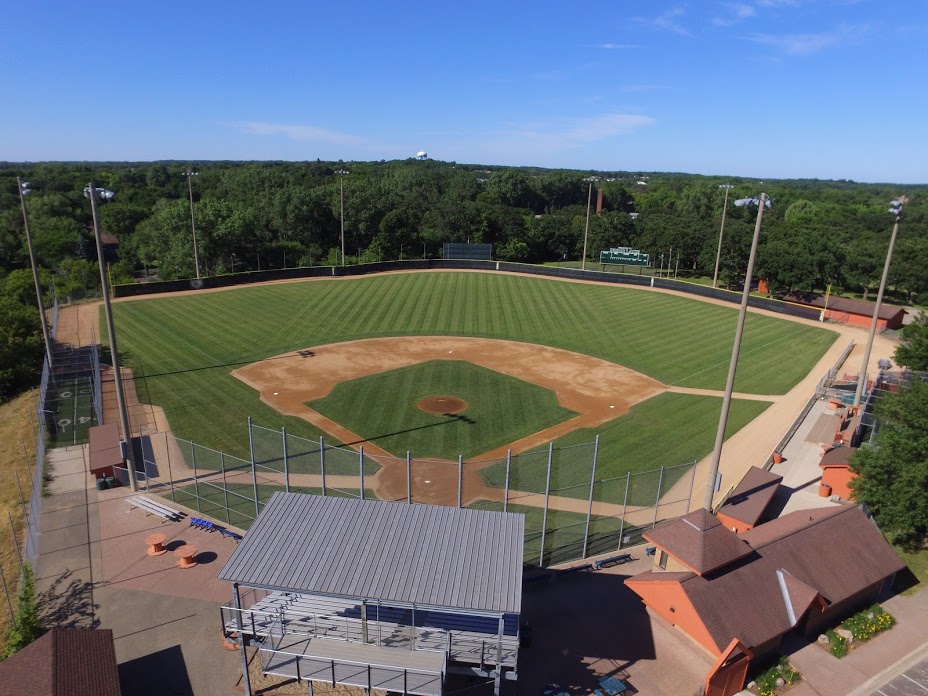 The PL Mudcats (15-8 DRS, #3 seed) hosted the Shakopee Coyotes (11-12 DRS, #7 seed) at Veterans Field of Memorial Park on a perfect Sunday July 31 for 200PM Region 3C Final 8 opening game. The Coyotes had to advance vs #10 Lonsdale Aces and won in 2 games in their best of 3 by scores of 13-0 and 2-1 while the Mudcats battled to the last day for #2 seed but were dropped by St Patrick and got the bye to Regions capturing the #3 seed. In the regular season the Mudcats won 7-6 with Ben Morrison bagging the win and Justin Hackett the save on May 20 and July 17 the ‘Cats got a 9 inning complete game 4 hit 9-1 win from pitcher Isaac Saad.

Saad got the call for the fish and pitched a 1-2-3 1st and the Mudcats provided support on a 1 out Jonny Houston single, followed by a Cole “Mr 30” Bjorge walk and RBI single by 1st baseman Kyle Schmidt. The rally on Coyote pitcher Tyler Sloss continued with RBI singles by RF Jake Lehrer and scoring completed on an RBI double by LF Tony Loeher making the score 3-0 after 1 inning. In the 2nd, the Coyotes had 3 straight singles by Johnson, Lazarri and DH Scott Bode before a lineout to rightfield by Rentz, called strikeout on Boys followed by a bases loaded soft grounder up the middle that shortstop Jonny Houston was able to corral and make a running throw to end the threat with bases loaded with Coyotes. After a scoreless Mudcats 2nd the Coyotes had leadoff CF Alec Pauly reach on a low throw from Houston that 1B Kyle Schmidt was unable to scoop followed by a 2nd Houston error on a potential doubleplay thrown low and hard to Jerad Lehrers right. With runners on 1st and 2nd Shakopee RF Alex Johnson drew a walk before Andy Lazzari put a ball in play that Kyle Scmidt was unable to field bouncing past him and Pauly to score and advancing the runners as well leaving bases loaded. DH Bode ripped a sacrifice fly to centerfield that Bjorge recorded for an out scoring a run but upon appeal, Johnson was ruled by the field umpire to have left 2nd early trying to advance to 3rd and the 3rd out was recorded with the run counting making the score 3-2 Prior Lake after 2 1/2 innings.

The Mudcats were scoreless in the 3rd & 4th before plating 4 in the 5th which chased starting pitcher Sloss for Justin Evans, and 2 in the 6th while Saad busted the Coyotes from the hill with 1-2-3 innings in the 4th, 5th and 6th innings and led the 7th hitting LF Ryan Rentz before retiring the next 3 batters. In the Mudcats 7th, with the score 9-2 PL, Brad “The Blade” Schoenrock led off with a single followed by a Nolan Rein walk and catcher Levi Schneider single to load the bases. An RBI single by Houston chased Evans yielding to Shakopee pitcher Chris Isensee who promptly fielded a Bjorge liner for the 1st out in the 7th before walking Kyle Schmidt to load the bases for Jake Lehrer with a 10-2 score. Lehrer ripped a double to deep left center plating Rein & Schneider for a walkoff 10 run 12-2 win.

*The winner will advance to the MBA State Tournament continuing bracket play for seeding. The loser will play the losers bracket winner of the Wednesday 8/3 game at New Prague between Faribault (#4 seed) & St Benedict (#8 seed) on Friday 8/5 TBA with the winner advancing to the MBA Tournament.

Jays On Brink Of Elimination In Best of 3 VS Victoria Vics Dropping Game 1.

The PL Jays got to the last week of the regular season fighting but were not able to climb the standings getting the #5 seed in Section 3B for 2016. The Jays traveled on a beautiful Sunday July 31 for a 6:00PM til with the #4 seeded Victoria Vics to start a best of 3 series with the winner advancing to face the #1 seeded Chaska Cubs in the Section 3B Final 4.

In the regular season on June 28th the Jays staff was thinned by unexpected absences but starting pitcher TJ Larson cruised through 6 innings and a 9-1 score before the Vics tallied 6 on reliever Chris Kelly in the 7th on 4 hits and 3 walks then posted 3 in the 9th pushing the game to extra innings winning in the bottom of the 11th inning 11-10 with reliever Pat Galvin getting the loss. In their 2nd (of 3) Section games July 20 (rain out from 7/5) the Jays had a 4-3 lead after 6 on Victoria starter crafty Chris Thulin and the Iron 9 Vics behind PL starter Austin Truso but had 2 errors in the 3 run 7th that helped the Vics bag the 6-4 win on reliever Lawson Zenner who got the loss while the Jays stranded 8 base runners. The Saturday July 23 game at Prior Lake was a forfeit as the Vics could not find 9 that wanted to play.

The Jays were greeted at Victoria Lions Park Poppitz field with a filth filled dugout dubbed the “no water zone” by hosts and got the offense rolling early on Vics pitcher Connor Osteriech by Jeff Butler ripping a ball to Victorias Veteran 2 bagger Greg Winegarden that he was unable to field. CF Jonesy Buesher followed with a single and Jays 2nd baseman Jim Schroeder drew a 1 out walk before rightfield Jason Peter laced a RBI single to left field plating Butler. The Jays stranded the bases loaded with Tommy Keating flying out to the pitcher and Dan Schroeder working to a full count before flying out to center to end the threat. The Vics evened the score with a 1 out single and stolen base by Greg Winegarden who was plated by catcher/brother Eriks RBI single just out of reach of Dan Schroeder. Erik also threw a cross body slide at short stop Chris Kelly in the 4th leading off with a walk before a 1 out grounder to second baseman Jim Schroeder, thrown to Kelly who missed the bag on the front end of a potential double play avoiding the fully extended Winegarden who initially took a step towards the dugout thinking he was out as the ball beat him but Kelly had missed the bag. The Jays mustered base runners in the 2nd with a 1 out walk to Chris Kelly and single by Butler but the threat ended there. The Jays had runners on the the 2-4 innings as well 7th and 8th (5 total stranded in scoring position for the game) but were not able to push across runs. Jason Peter who started in rightfield, then pitched 2 scoreless facing 8 with 1 walk, 1 hit and 1 strikeout was the Jays only multi hit player with a 2-4 effort and the Jays only RBI. Zenner fought a tight zone keeping the Vics scorless in innings 2-5 and a 1-1 score until host Victoria tallied 4 in the 6th on 2 hits, 3 walks and an 2 errors in the outfield helping the Vics to the 5-1 final score.

REMINDER: VetPASS16 NOT valid for admission. Section 3B collects admission